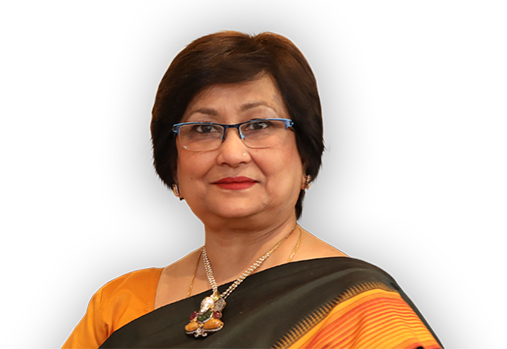 Pallavi Shroff is the Managing Partner of Shardul Amarchand Mangaldas & Co and heads the Dispute Resolution Practice at the Firm. She is also the Chief Mentor for the Competition Law Practice.

Pallavi has been a driving force in further enhancing the positioning of SAM & Co as India’s premier full service law firm ever since she took over as a Managing Partner in 2015. Under her guidance, the Firm has grown to become more than a 100 Partners entity, diversified practice offerings, accelerated pan-India presence with offices in seven cities and embraced technology initiatives such as use of Artificial Intelligence to transform the way the Firm works. Pallavi has been instrumental in establishing a number of special initiatives for women that includes versatile work arrangements, flexible timings, women-centric events and fostering women lawyers to advance to leadership roles.

With over 39 years of extensive and highly regarded experience, Pallavi’s expertise spans across Dispute Resolution, Competition Law and White Collar Crime. Focused on commercial dispute resolution, Pallavi advises clients on large trials in formal proceedings but also actively evaluates new or alternative resolutions to disputes at an early stage, including counselling them during the life cycle of projects to restrict issues from developing into disputes and, if that does happen, to ensure the clients have the best legal advice and are well prepared in the event of litigation or arbitration.

With regard to White Collar Crime, Pallavi has deep experience in undertaking clients across multi-jurisdictional investigations, including matters involving allegations of bribery and corruption. She has represented companies and individuals in investigations involving simultaneous enforcement actions by government agencies.

Chambers and Partners has called Pallavi Shroff “a widely acknowledged stalwart in the field of competition law, best known for her handling of cartel, abuse of dominance and other contentious issues, but increasingly active providing strategic oversight on very large-scale, multi-jurisdictional merger control mandates” while ‘Who’s Who Legal of Commercial Arbitrators’ has rated Pallavi as “one of three leading practitioners involved with arbitration”. RSG India 2019 has quoted clients’ comments that says, “Pallavi’s ‘understanding of the issues’ was commendable and that her ‘knowledge of business related laws’ and ‘responsive approach’ was excellent.”

Pallavi is a director on the boards of prestigious Indian companies and advises them on governance law and regulations. Apart from her professional commitments, Pallavi is actively involved and guides the many corporate responsibility initiatives across the Firm in the education, women empowerment and other focus areas.

Pallavi frequently advises and counsels clients on some of the largest and most challenging litigation and arbitration matters, with regard to energy, infrastructure, natural resources, mergers & acquisitions, legislative and policy related matters. She appears regularly in the Supreme Court and High Courts of India, and in arbitrations, mediations and international legal disputes. She is an Alternate Member (India) at the ICC (International Chamber of Commerce) Court of Arbitration and is also a member of the CII Arbitration Law Committee.

Pallavi is presently a Director on the Boards of prestigious companies such as Indigo, One97 Communications Ltd (Paytm), Apollo Tyres, Trident Group, and Juniper Hotels Ltd.